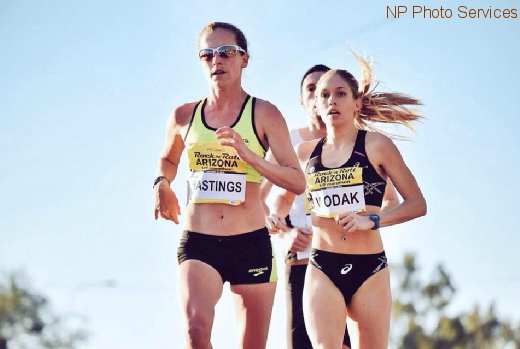 Canada’s fastest active marathon runner Dylan Wykes and Natasha Wodak, the national record holder in the 8K, competed today in the half marathon distance at the 2015 Arizona Rock ‘n Roll Marathon in Tempe. Wykes finished third in the time of 65:29, while Wodak competed well to finish second in 72:23. Both athletes are members of the BC Endurance Project based in Vancouver.

Wodak finished second to American Amy Hastings, who finished in 72:04, while the third place finisher was Molly Watke, who finished well back in 75:59. Wodak is back after a long-term bout with plantar fasciitis that derailed some of her training and racing plans during 2014, however, she raced well last week at the BC 8K Championships by winning and finishing in the time of 26:37, still over a minute off of her Canadian record from 2013 (25:28). In November, she finished third in the Canadian Cross Country Championships; she entered as the defending champion.

Asked about her injury Wodak said, “The foot is pretty good, it held up well probably because I wore my trainers! Asics Excels! Amazing. I am super-happy. It feels so good to be back feeling fit! I almost cried at the finish!”

She added, “I ran behind Hastings, but the first two miles were both 5:20, but Rich (Coach Richard Lee) told me to just stay behind her. So I did!”

This performance is a new personal best for Wodak, her previous best was 1:14:07 from the GoodLife Fitness Victoria Half Marathon. According to the IAAF scoring tables, it suggest that her half-marathon performance points to a 2:34:25 marathon. Her best, in her only effort to date is 2:35:16 from her 2013 Toronto Waterfront Marathon performance.

Wykes who was racing shortly after suffering from a seasonal illness said, “The race was a good start to what will hopefully be a big year. Sure it would’ve been nice to stay in the mix with the leaders for longer, but I had to listen to my body today. I expect my fitness will come along now over the next few months.”

Wykes’ half-marathon best is 62:38 from the same event in 2012. He also owns the second fastest marathon time in Canadian history with his 2:10:47 from the 2012 running of the Rotterdam Marathon.

Meanwhile there was a marathon and half-marathon taking place at the same time in Houston, Texas.

A pair of half marathon newbies ran like seasoned veterans on Sunday morning in Houston as Diego Estrada and Kim Conley emerged as the winners at the 2015 USA Half Marathon Championships at the Aramco Houston Half Marathon. Estrada pushed the pace the entire way and dropped the field just after 5k to win his debut half marathon in a splendid 60:51. Conley took a more patient approach, waiting until 10 miles to make her move before powering home to a 69:44 victory. Both will take home $13,250 for the wins ($12,000 for the win, $1,250 each in time bonuses).