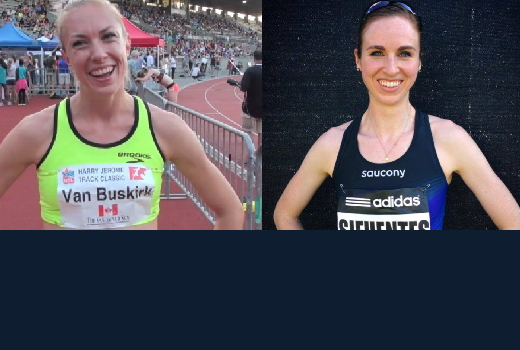 Winnipeg’s Nicole Sifuentes and Toronto’s Kate Van Buskirk will represent Canada at the 2014 Glasgow Commonwealth Games, competing over the 1,500m distance. Both athletes are running well in advance of the games with the slightly faster Sifuentes continuing to round into form, while Van Buskirk has been producing personal bests throughout the spring.

Sifuentes won a bronze medal at the IAAF World Indoor Track and Field Championship on March 9, 2014, which took place in Sopot, Poland. Although she was well off the lead time of 4:00.61 run by Abeba Aregawi, who represents Sweden, Sifuentes set a national indoor record in this race with her time of 4:07.61.

In June, the thirty-year-old demonstrated good finishing speed, by finishing third in an 800m race that split 400m in over 60 seconds. In contrast she set a seasonal best and a near personal best a few days before in the 1500m distance 4:04.87. Her best at the distance is 4:04.65. Her 800m best is not far off of Canada’s best 800m athletes with her 2:01.30. As championship races go, often the finish times are slow, but the pace can vary greatly throughout the race. Sifuentes’ having the ability to kick well and race smart as she demonstrated in the 800m race as well as her coming into lifetime best form suggests a potential outstanding result in Glasgow.

She has good international experience, as she has competed in the prestigious Diamond League meets as well as the 2012 London Olympic Games and twice she competed in the IAAF World Indoor championships.

Van Buskirk is enjoying her best season to date as she has run personal bests in the 800m distance with her 2:02.62. She ran a best time of 4:06.97 for the 1,500m distance this spring as well as her performance at the 2014 Harry Jerome Track Classic was also a best with her 4:28.08 mile (1,609m) time. She rebounded nicely after not finishing the 1,500m race at the Victoria Track Classic, two nights before, due to asthma.

Both athletes will likely have to contend with tactical races that may include great pace changes that will test their range throughout the four–minute race.  The 2012 London Olympic Games winning time in the final was 4:10.23 by Turkish drug cheat Asli Cakir Alptekin.  Fellow Turkish athlete Gamze Bulut finished in 4:10.40 and third went to Maryam Yusuf Jamal of Bahrain who finished in 4:10.74. These times appear slow on the surface; however, are the result of very tactical racing.

Results can vary greatly in international championship competition, for example the top three women in the 2013 IAAF World Track and Field Championships finished in 4:02.67, 4:02.99 and 4:03.86, respectively, between Abeba Aregawi of Sweden, the USA’s Jennifer Simpson and Hellen Onsando Obiri of Kenya.

During the 2010 Delhi Commonwealth Games, the top three athletes in the final race were Kenya’s Nancy Jebet Langat with her 4:05.26, followed by Kiwi Nikki Hamblin in 4:05.97 and third place to Stephanie Twell of Scotland who finished in 4:06.15. To get into the final, the slowest qualifier ran a pedestrian 4:16.13 by Kenya’s Irene Jelegat. Although she qualified 1/100ths of a second behind gold medallist Langat, she finished nearly three seconds back and out of the medals for sixth place.

Both Canadian athletes are competing very well this spring.  Expect both Sifuentes and Van Buskirk to make the finals of the 2014 Glasgow Commonwealth Games 1500m. On the right day anything can and often does happen.

The world all-time best results for the women’s 1500m are unfortunately tainted by performances that are suspected to have been run by drug cheats, led by four Chinese performances, see below.