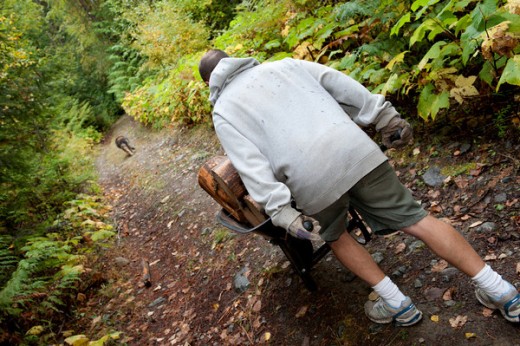 Every single part of Steve Archdekin’s afflicted body hurts like hell. From his head to his toes, his knees, elbows, hips, ankles, shoulders, neck, his entire skeleton constantly aches. His face, skull, toes and nose are in a perpetual state of pain. Well except for his nose. “The only place on my body that doesn’t hurt is my nose; I have long since forgotten what it is like to simply not hurt.”

Steve’s face hurts when he smiles, but he smiles all the time, especially in the middle of a triathlon. His tendons hurt too; his muscles, connective tissue, ligaments, cartilage and organs are in a constant state of pain. “I can feel my kidneys hurt.” Steve tells the media at the Kelowna Apple Triathlon.

Despite the pain, Archdekin swims, cycles and runs when training for triathlon, he also pushes a wheelbarrow of firewood sometimes in chest-deep snow and often in the dark, up a long hill to heat his cabin. Why doesn’t he just curl up and quit, you may ask? “Because I see life as a gift”, says Steve in a long email to a group of potential supporters.

Visit his site and his charity Triathlon for Kids.

35 years ago, he was supposed to die within 24 hours of his birth. The condition called Hyaline Membrane Syndrome was threatening his life. Of course he didn’t die.

Growing up in Wasaga Beach, Ontario he led a relatively normal and very active, sport-oriented childhood. In September 1993 at the age of 19, he picked up what appeared to be a common cold that progressed. It progressed to the point where he could barely move by Christmas. From it he developed a rare form of arthritis called Reiter’s Syndrome. He was told there is no cure and would endure permanent suffering for the rest of his life, which so far, has turned out to be true. Since then, Steve has developed another form of arthritis, Ankylosing Spondylitis, and has picked up other issues along the way including Osteoporosis.

Living in the Mountains

Steve lives in a forested and mountainous area near Nelson, BC, in the middle of big-snow ski country. Despite his situation he refuses to give in. For example, to get anywhere from his cabin, he must walk one and a half kilometers or snowshoe to his truck. Sometimes he does this trek through waist-deep snow. “One of my favorite things to do is walk with my dog to the meadow down the path from my cabin, deep in the bush, and just watch the mountains be mountains.”

Archdekin Pursues Major Sponsor for His Charity, Triathlon for Kids

Archdekin has pursued Adidas, at Adidas North American Headquarters located in Portland, Oregon. “Their ‘Impossible is Nothing’ tag line, is perfectly suited for my situation”. He looks to convince Adidas to demonstrate their marketing department’s value system by applying, Impossible is Nothing to a powerful television commercial, which he has already partially written. The commercial will feature Archdekin swimming, cycling and running in tough whether, for his charity, Triathlon for Kids.

He has already trekked to Portland in pursuit of their marketing department, but first things first he had a half-marathon to conquer. Archdekin shared this post race, “the Portland half-marathon kicked the crap outta me. Me and my pain were having an all-out slug fest, but as much as it tried to take me down, I punched right in the mouth more times than it could handle and I took that race down”.

When Completing a Triathlon

When Steve runs in a triathlon, he limps and hobbles along. His stumble makes him look a little like Yoda, after an extended light sabre battle. Because the triathlon ends with the run, he literally stumbles into standing ovations at every triathlon. I assume that is more than he needs to make it into the chute, to remain upright. In the swim portion, Steve can be seen spy-hopping for a line, he treads water vertically to get his bearings correct. “I swim like how a sailboat tacks, zig-zagging across the course.”

It is on the bike where he gets a bit of a respite and enjoys the speed of the fast athletes ripping past him. Perhaps Steve Archdekin’s situation is an opportunity to inspire others to do great things too, like this from a fellow competitor. “I have AIDS and you just made me realize how lucky my life is,” as he assisted Steve at the Kelowna Apple Triathlon. Steve appreciates the kindness, but there is nothing anyone can do for him, “I’m fine, it’s only arthritis. There’s nothing anyone can do for me.”

This is his refrain he repeats throughout races, to hold back well-meaning volunteers and passers-by.

Tom Piszkin from Titan Flex Bikes donated a brand new ride to Steve. And Sequel Naturals have also assisted Steve in his pursuit. We can’t help him run and we can’t take away his pain, but in the parlance of ‘many hands make light work’, we can bring him to the start line, prepared, so he can raise funds for his charity.

For donations or help, Steve can be reached at: “International Triathlon for Kids” <triforkids@gmail.com>,