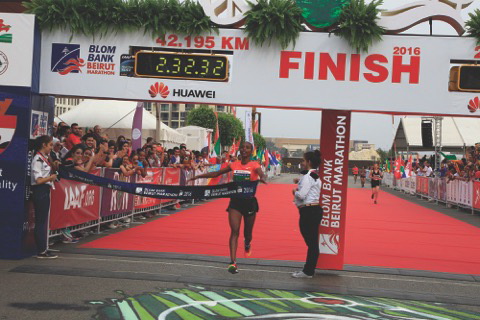 Securing the services of the defending champion is normally a sign that a race is in fine shape. So, it is, that Tigist Girma, winner of last year’s Blom Bank Beirut Marathon, will return to the Lebanese capital for this IAAF Silver Label race, November 12th.

The 24-year-old Ethiopian surprised many with her victory a year ago running the second half of the race pretty much alone and in temperatures that soared above 22C. It was also her third marathon of the year. Still, she recorded a time of 2:32:48.

“It was a good race for me,” she says from her training base in Addis Ababa, Ethiopia’s capital. “I had been working hard to win this race. I did win so I am happy that I met my goal. It was very difficult to run a long distance without a strong competitor who can push me to run a fast time.”

Earlier this year, June 11th,  Girma was invited to run the Lanzhou Marathon in China. Again she finished on the podium claiming second place in a new personal best time of 2:32:15. Clearly, though, she is not satisfied with her times and has ambitions beyond 2:30.

“Winning the 2016 Beirut Marathon,” she reveals, “gave me good inspiration to keep fighting and I followed the same training program I used to prepare for the 2016 Beirut marathon. I was also training to run a fast time.

“The Lanzhou marathon had the perfect conditions for me. But I still didn’t accomplish my target. So I am training to beat the Beirut marathon course record this year. My target is 2:28:00 this year.

“Right now I am doing all the training in the program my coach gave me and I run 172 kilometres a week.”

That Beirut event record is 2:29:15 set in 2014 by her compatriot, Mulahabt Tsega. Changes to the course, including the elimination of an infamous climb along the shore of the Mediterranean Sea, should help Girma in her quest for a new personal best if not an event record.

Girma lives with her boyfriend in Addis. She moved from her childhood home in Sheshemane to Addis just two years ago to pursue a professional running career and trains under the guidance of veteran coach Haji Adilo. When she is not training or recovering from the hard sessions she enjoys watching movies at home or attending church.

“This is one of my biggest advantages to train with experienced and successful athletes and I have learned a lot from them,” she declares. “Amane, especially, advises me on every aspect. She advises me how to regulate my weight and how to train to run a fast time.  Amane always told me that I am talented and young and I must train hard to unlock my potential.”

With the 2016 Beirut men’s champion, Edwin Kiptoo, having already announced he is returning to the race the organizers are delighted in having both champions on the starting line. It certainly indicates this marathon is becoming stronger than ever and should experience a bright future.