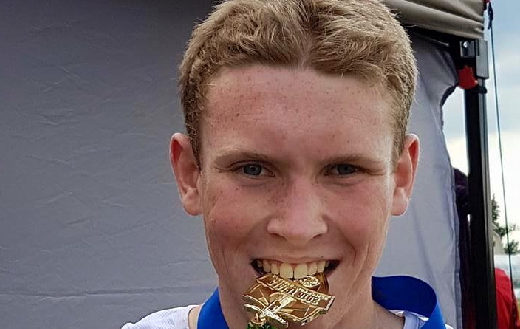 His personal best in the 1500 is 4:13.51, which he achieved in Nanaimo this year. That performance ranks him number two in the world.

Asked about what it means to represent Canada in Rio, Stanley told Athletics Illustrated, “Competing for Canada in the 1500m (T-37 category) is an incredible honour and a dream come true for me. I will be competing against the best T-37 1500-metre runners in the world.”

Stanley trains under the tutelage of two-time Olympian Bruce Deacon. Deacon leads a group of youth runners known as the Prairie Inn Harriers Youth Team (PIHYT), as part of the 800-member Victoria-based club, the Prairie Inn Harriers. The youth team can be spotted at track and cross-country meets because of their distinctive horizontal striped singlets, modelled after the old English Clubs. They are a talented group.

Asked about his particular charge in Stanley, Deacon said, “It’s been very rewarding as a coach to see Liam make the Paralympic Team in Athletics.”

Stanley is also a talented soccer player and has been a member of the national Cerebral Palsy soccer team since he was 14.

Deacon and Stanley struck a deal.

Being named to Team Canada for Rio it appears that this was a fortuitous accord for both Deacon and Stanley.

“At just 19, Liam has the potential to win gold over the next few years. It’s exciting to be part of his success, as there 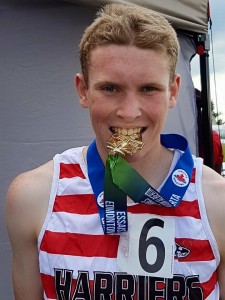 is just so much upside to his running, as he has only been training for a bit over a year,” added Deacon.

Deacon knows a thing or two about international competition having raced in the IAAF World Track and Field Championships three times, Olympics twice and has run 2:20:00 or under over 20 times in his career including two 2:13s.

“It will definitely be a competitive race. This will be my first opportunity to race on the international stage, but I am excited about the challenge. My coach Bruce Deacon has prepared me really well, so I think I’m ready to give it my best shot. My ultimate goal is to win a medal for Canada,” added Stanley.

The Paralympic Games begin on Wednesday, September 7th and run through to Sunday, the 18th. Information about the competition can be found here: https://www.rio2016.com/en/paralympics