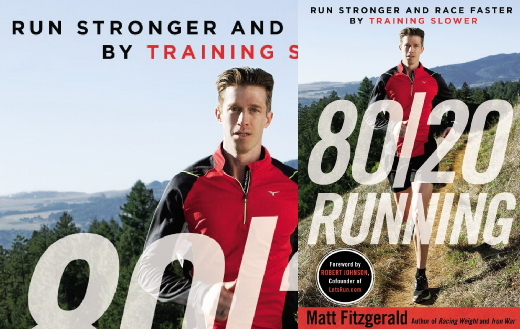 Author Matt Fitzgerald’s most recent published work is, 80/20 Running: Run Stronger and Race Faster by Training Slower. This is a training book geared toward middle and long distance runners of all abilities, but the basic premise can be applied to any endurance sport.

To an experienced runner, that basic premise of training by the 80/20 guideline is self-explanatory, it’s all in the title; however, for the curious or inexperienced athlete, the ratio can be described as running 80 percent of the time easy and 20 percent of the time at medium or high efforts. This ratio of slow and medium and fast tra 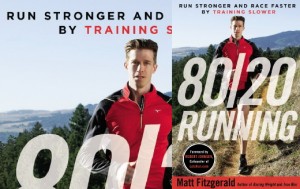 ining works, as all successful middle and long distance training schedules are based on programs that resemble Fitzgerald’s 80/20 guide.

Fitzgerald often cites scientific literature to support the various aspects of training that he describes throughout the book. He also often references the unscientific, but legendary coach Arthur Lydiard. At a glance it appears the training resembles that of Lydiard.

By and large this is true; however, almost as an ancillary note, the art of coaching is an instinctive function and a practically-learned skill, where the coach must make judgements and adjustments as the athlete trains and responds to the prescribed program. There is instinctive and logical reaction, pro-action and decision-making that requires thinking beyond an illustrated framework made up of paces, heart rates, gross volumes of distances and efforts. Each person is an experiment of one, physically, mentally and to some, spiritually.  It goes without saying that the true art of coaching probably cannot be fully learned from the pages of a book, therefore it is worth mentioning almost as a caveat (to any training book) most athletes still require a coach.

Keith Livingstone, author of Healthy Intelligent Training, a book about Lydiard training written in modern language and referencing modern science, wrote the following in an interview with Athletics Illustrated:

The basic premise of Lydiard’s system is incredibly simple, but don’t be fooled by this so-called simplicity. I like the notion that if an idea can’t be outlined on a business card, then it’s too complicated! So if I were to design Lydiard’s business card, I’d say “aerobic base dictates anaerobic training potential.” HOWEVER – and this is a BIG HOWEVER – there is a balance and sophistication about it that can be exquisite in its delivery, particularly in the final touches in track preparation in middle distance.

So what has Fitzgerald delivered in this book that is not written in a plethora of other publications that are out in the market?

He does explore the mind-body connection well. For example he discusses at length how a runner’s form is their form and an athlete should not be forced to run differently in an attempt to improve it. According to Fitzgerald improvements will happen with good training principles, mileage and fitness. Therefore the body will run automatically, as efficiently and as effectively as it naturally progresses. Here, he cites one of the preeminent biomechanists in Peter Cavanagh, who in a 1982 study claims that any adjustment to a natural stride requires the athlete to use up to 20 percent more oxygen.

Fitzgerald asks you that if you were to take a serum that will automatically give you the exact same fitness as 99 other runners (I presume, to make the number an even 100, but he doesn’t appear to utilise the number beyond the rhetorical question) would you run a 10K in the exact same time as the others? He answers the question for you by writing, “not a chance.” His point is that skill is the differentiator, not just cardiovascular fitness. It is inferred that skill is primarily neuromuscular development through the automation-style of sound and repeated training. This point may be debated for some time, as a tennis player or baseball player for example can swing the wrong way ten thousand times and never improve, but in contrast; Fitzgerald believes that a runner’s form will come around. There certainly is evidence of this as two or more world-class runners racing can look distinctly different from each other as they go head to head to the finish.

He uses Paula Radcliffe as an example. She is the world record holder in the marathon with her 2:15:25 best. She does have a head bob that is unique and perhaps some coaches would be motivated to work that bob out of her forward body movements; however, if you were to just view her form from the shoulders down to her feet, she developed impeccable running style over time. She developed naturally as she became fitter over the years, according to Fitzgerald. Perhaps Radcliffe is too good of an example?

Fitzgerald argues that Kenya for example, didn’t just emerge as a top-of-the-world running nation upon first exposure to international competition, rather it took time and the arrival of the colonialists of Great Britain to teach what appears now to be something like the 80/20 rule of training. In other words Kenyans are not necessarily naturally more talented, but are skilled because they are well-trained from a lifetime of running for transportation, living more healthily and being born and raised at altitude. It’s an environmental thing.

He references Brother Colm O’Connell from Ireland, who has trained many of the great runners that have emerged from Kenya. O’Connell brought periodised training that first develops, in a sequential plan, the aerobic system before the anaerobic system, to Kenyans. Fitzgerald references the time Lydiard visited Kenya in 1992 and was shocked by how much running children were doing for transportation. At this time, the apparently counter-productive hard interval training regime was sweeping North America, to poor results. In response, Lydiard wrote an open letter in Track and Field News magazine to American coaches pleading for them to follow Kenya’s cue.

Fitzgerald cites the Salzburg study and a concept called Polarized Training, where 80 percent of the time training is done at low intensity and that moderate intensity is minimalised the most, as according to Seiler, et al, too much moderate intensity training is more harmful than easy efforts and not as effective as high intensity efforts. According to the study, the biggest performance gains came from the Polarized Training (high volume – low intensity) group out of three groups used in a test: “High Volume Group”, “Threshold Group” and “High Intensity Group”. The outcomes should not surprise anyone, however, it bears repeating since it is a scientific study that lends additional credibility to the pragmatic theories that have been proven to work over the past 60 years; aerobic foundation dictates anaerobic capability.

Fitzgerald offers some basic principles to guide athletes, for example he created a rate of perceived effort (RPE) scale that is more user friendly than the popular Borg scale that starts at 6, being very easy and ends at 20, being very difficult. Fitzgerald’s solution is a 10-point scale, 1 through 10. He also lists several rules of sound training to adopt.

The book is mostly error free; however, there is one mistake that any serious fan or student of the sport would be surprised to read where Kenyan Nyandika Maiyoro was the first from his country – a pioneer of sorts – to compete in the 1956 Sydney Olympics, but of course those were the Melbourne Games, Sydney took place 44 years later.

What training book would not be complete without schedules that offer programs for runners of different levels for varying distances? The schedules fill 47 of the 246 pages that make up the book (before the Appendix). Perhaps as a general guide, schedules help ground beginning runners; they apparently sell books too.

Fitzgerald also recommends 80/20 training for everyone including people simply wishing to lose weight, training for triathlon, cycling as well as cross-training.

Beyond providing sound fundamentals of endurance training, perhaps this book will also redirect a few people away from the current fad of HIIT-style training, where people who seek a quick fix to their weight or fitness issues, delve into high intensity, four to 20 minute work bouts during their lunch break.  Seeing results from any training program requires a commitment and patience and a long-term, perhaps lifestyle view.

Saying this, it would benefit most aspiring endurance athletes to also consider taking the time to read 80/20 Training, to guide them with sound principles, right out of the gate.