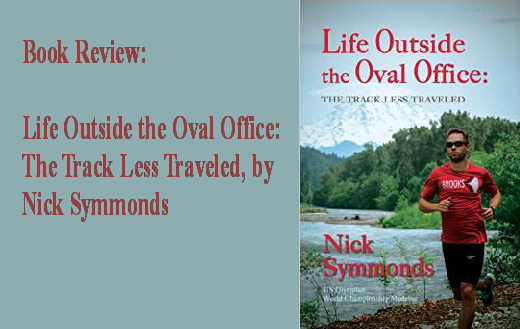 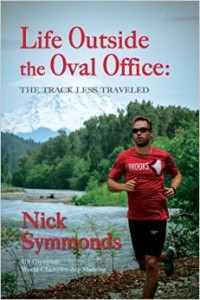 Title: Life Outside the Oval Office: The Track Less Traveled

One of America’s all-time great half-milers, Nick Symmonds, self-penned his autobiography in 2014 and cleverly named it, “Life Outside the Oval Office: The Track Less Traveled”. The reviews have largely been positive for its pure entertainment value; however, the cleverness stops at the title; don’t seek belletristic finesse here.

As autobiographies go, the Frenchness and possibly the hint of sophistication that are evoked from the word, “memoir” would allude to something that Nick Symmonds’ book is not: aesthetic literature. At no time does Symmonds appropriate a literary device; neither a metaphor nor an allegory is found within the 230 pages that make up this read. Saying this, entertainment value and literary savior faire are not mutually exclusive. As for telling one’s life story, the biography serves; it is a fun and entertaining read.

Chronologically-speaking, his life story unfolds tidily starting from childhood, where he grew up, dare I say in a life as American as apple pie, or perhaps more appropriately American as Apple iPad. He often references technology when relating his communiques with his coaches, various girlfriends, sponsors, family and friends by texting, messaging and emailing them, he is indeed as American as Apple iPad. His childhood in some regards is fairly fairy tale-like, he has a younger sister that he adores as he does his parents, his Mom is beautiful, and Dad is a surgeon.

“….I thought my family was a bit of a cliché: two parents together and in-love, two kids (one boy and one girl) and a few pets…” and “…Now that I am grown up and have moved out of that wonderful home, I can appreciate how rare and special it was.” He doesn’t address whether he still feels that his childhood was a cliché, but does appreciate the closeness of his family and he values that. He acknowledges them repeatedly throughout the book, they are his foundation.

The story rambles into his awkward teen years and voila, he discovers that he possesses what every other knuckle-dragging, teenage male, that stumbles awkwardly about the republic is cursed with: his blood courses with full-on raging hormonal effusion; he is his very own, self-contained global warming boy-sphere. His, “I was fascinated by the opposite sex,” statement must have been written with great restraint. He was locked into the tractor beam by his fascination of girls.

Symmonds was fortunate in that a running decision that would ultimately influence every aspect of his life going-forward worked out to his favour. Borne from the most basic male instinct, he chose running because of his attraction to girls. Good thing he is a handsome version of John-Boy Walton, or he would have grown to be a very frustrated young man. Well he was frustrated anyway and expresses his discontent by opposing the views of authority throughout his life.

Symmonds is brutally open and honest here, possibly to a fault. There are times during the story when I felt I didn’t need to read about his umpteenth episode of sex with beautiful foreign women, or the girl next door for that matter. If so, I would just re-visit Dear Boy: The Life of Keith Moon. However, his honesty opens the reader’s eyes to the life inside the oval office and what goes on behind the scenes. Symmonds prudently takes the time to explain sport-specific details to the reader, just in case he has managed to appeal to a broader audience that exists outside the oval office. The book comes to an end shortly after his run at the 2013 Moscow IAAF World Track and Field Championships, at this time Symmonds is still just 30 years of age.

Symmonds does, however, sway from publishing a polished, corporately-approved whitewashing of the truth that we so often see with athletes that publish while still competing. He hurts almost no one, publicly, but let’s his division three coach from Willamette University have it. Readers will be hard-pressed not to cheer for Symmonds as his frustrations are often understandable. His list of antagonists is impressive: University coach, USATF, Putin, Nike, among many others.

“Willamette University will never be known for its incredible track and field team the way the University of Oregon is, but the men and women of the Bearcat Pack made my time there special and memorable. All of them-except one particularly stubborn man…”

“When I walked onto the track I saw Coach Kendrick standing at the fifty-yard line, smack in the middle of the field. As I approached, he asked what I was doing at his practice, and reminded me that after what I pulled in Tennessee, I was no longer part of his team…”

“ ….At this Coach Kendrick stepped toward me, just inches from my face. Though he was considerably larger, I was prepared to kick his ass…”

Nike is the final, proverbial 500-pound gorilla in the room. If it wasn’t for their decision to let Symmonds find out for himself what the market will bear for a good looking, American as Apple iPad, marketing juggernaut (he is after all: Nick Symmonds L.L.C.) and international athlete, Brooks, his new partner, would not have entered the scene and hence, the book would have become little more than a shiny, polished trophy. For readers the book will be difficult to put down.

There have only been five performances that are faster, since his 800m final race from the 2012 London Olympic Games (fifth) of 1:42.95. Only 29 men in history have run faster – some multiple times – and only two Americans have ever finished the distance in a better time, one in the same race, Duane Solomon. Johnny Gray during the 1980s ran faster at least twice. World record holder David Rudisha of Kenya has run faster at least twelve times, while countryman Wilson Kipketer, also a former world record holder, has run faster at least 20 times, which makes Symmonds’s 82nd fastest all-time performance all the more impressive, for a short, stocky suburban, middle-class white kid from Idaho.