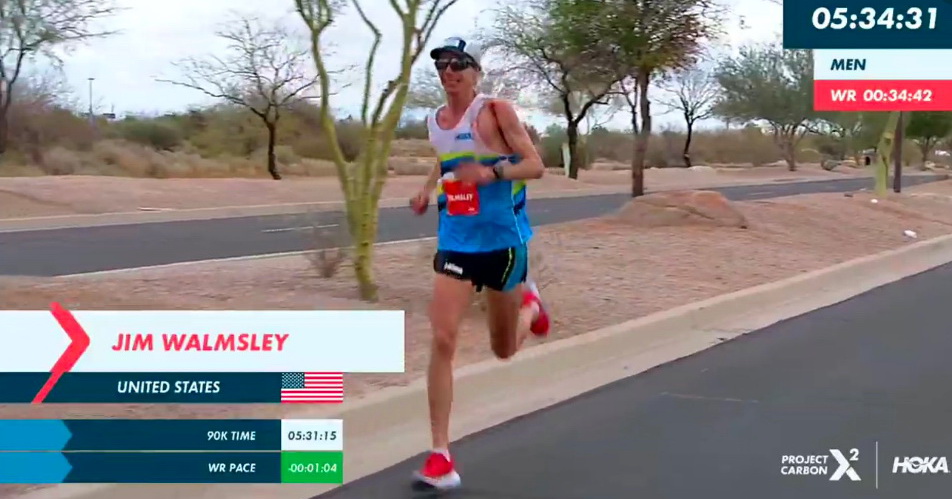 American Jim Walmsley nearly took the world 100K record on the weekend. He came up short by just 12 seconds, however did improve the national record. He finished in the time of 6:09:26 at the Hoka One One – Project Carbon X 2 event in Chandler, Arizona, on Saturday.

Japanese runner Nao Kazami set the current world record two years prior at 6:09:14. Walmsley was on pace to take the record for over 90K. His final 10K needed to be 37:58.

The course was run with repetitions of an 11K loop.

He told Runner’s World Magazine, “Definitely feels like one of the more special runs I’ve had. Really felt like I got everything out of myself today, dug real deep, and fought all the way to the line. I don’t feel like I gave up, but it was tough to see the seconds tick by. It’s a little bittersweet, but definitely awarded with an American record today, and those don’t come very often. I don’t get to do things like this in my home state very often, so it’s extremely positive. A 45-minute PR. It was a pretty amazing day.”

Jim Walmsley just narrowly missed the 100K world record of 6:09:14 with his 6:09:25 (unofficially) at @HOKAONEONE’s Project Carbon X2 event. Sets a new American record with the second-fastest time ever.

11 seconds though! The last 5K looked absolutely grueling. Such a tough run. pic.twitter.com/21lUd0OA0z