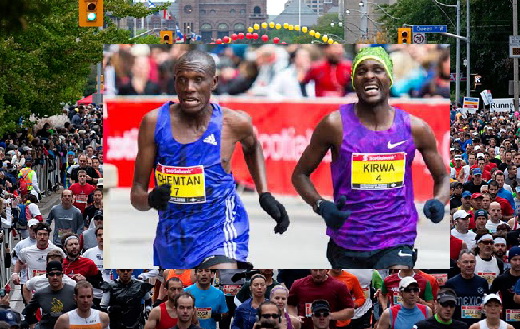 Less than a second separated Kenyans Ishhimael Chemtan and Gilbert Kirwa at last year’s Scotiabank Toronto Waterfront Marathon with Chemtan’s sprint proving to be the difference. It earned him victory in 2:09:00.

The pair will renew their rivalry in Toronto October 16th as the IAAF Gold Label race gets underway at 8:45 a.m. precisely.

“I remember it was very cold during the 2015 race,” Chemtan said recently from his training base in Iten, Kenya. “My shape and preparation is better than last year. My best time is 2:08:20 and I believe I will be able to run better this year. I am looking to run under 2:08.”

Clearly, he has the ability to run much faster having beaten athletes with superior personal best times over the years. Kirwa, for instance, has run 2:06:14. In April of this year Chemtan finished 2nd in the Milan Marathon setting that 2:08:20 personal best time.

Both Chemtan and Kirwa have been preparing to do battle on the streets of Canada’s largest city with the latter eager to turn the tables after coming so close a year ago. Losing in a sprint was more than just a matter of pride. It was also rather costly. The winner takes home C$25,000 with the runner up claiming C$15,000.

“This year I am prepared well and I hope for a good performance,” says Kirwa. “I also see this year that there is a strong field in Toronto. If we can work together, with my competitors, I am convinced that we can run faster than last year. More so if the weather will be good and favourable then it will contribute to faster times.

“My expectation is to run good and go for the course record in Toronto [2:07:05]. Training is going well and I tested myself in the Tilburg 10miles race in the Netherlands. I am in the right shape for Toronto.”

Kirwa finished 4th in Tilburg with a time of 45:40 and that is certainly an indication he is ready to duel with his compatriot again. The prize purse is a great attraction as he looks after his four brothers and three sisters. In addition, he has started a family of his own.

“I have a family with two boys,” he adds. “I don’t have any other business apart from investments. I am a landlord to tenants who make monthly payments to me.”

When he is not busy fulfilling his landlord duties, training, traveling to races and spending time with his family he enjoys an occasional game of snooker and watching movies. As the Toronto race approaches he will focus even more on getting as much rest as possible between training sessions. The course record would be a handsome reward for Kirwa and his rivals.

Coincidently, it is one of Chimsa’s training partners who carries Ethiopian hopes at this year’s Toronto race. Seboka Dibaba – no relation to the famous Dibaba sisters, Tirunesh, Ejegayehu and Genzebe –  has also beaten the 2:07 mark with a personal best time of 2:06:17. More recently he finished 2nd at the 2016 Mumbai marathon in 2:09:20. He says his focus is entirely on running well in Toronto.

“I am physically doing good now,” says Dibaba, who is married and has a young daughter. “I am training well with full energy and a healthy body. I want to be highly competitive among the tough athletes competing in Toronto.”

All three of these leading contenders say they prefer to follow the pacemakers through 30 kilometres before contemplating a decisive move. Those pacemakers will be given instructions to set the desired pace at a technical meeting the day before the marathon. That’s when a clear weather picture will be available.  It is a given that Kirwa, especially, won’t want to see the race come down to a sprint again and will no doubt want a fast early pace.

Race organizers have put together a field worthy of an IAAF Gold Label and should the conditions be favourable and if the pacemakers are able to tow the contenders through the first 30 kilometres, there is always the chance of a new course record. And that would be most welcomed by the thousands of spectators and participants who share the enthusiasm for this competition. It would be a blessing to the man who does break that record.