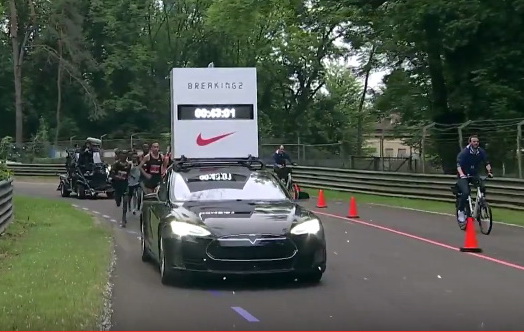 Saturday morning in Monza, Italy, Kenyan Eliud Kipchoge tried to do what no human has done before, to run the marathon distance of 42.195 kilometres (26.2 miles) in less than two hours. Although he failed to break the benchmark, he did run 2:32 faster than the current official world record of 2:02:57 as set by fellow countryman Dennis Kimetto on the Berlin marathon course in 2014.

Kimetto’s performance continues to stand as the official record, as the worldwide governing body of the sport, the International Association of Athletics Federations (IAAF), will not ratify the Monza run as the event was paced by runners not attempting to take in the entire distance and their sole purpose was to pace, rather than race Kipchoge. Additionally, Kipchoge was handed his fuel by fellow runners.

In a display of great fitness, he covered the distance in the time of 2:00:25 on the Autodromo Nazionale auto race track.

“I’d like to thank all the athletes that helped me by pacing and of the organizers for all of their hard work,” the Kenyan said after finishing. “The world now is just 25 seconds away.”

There were two other runners who attempted the historic benchmark, Ethiopia’s Lelisa Desisa, who owns a personal best of 2:04:45. He finished in the time of 2:14:10 and Eritrea’s Zersenay Tadese, who entered the race with a best of 2:10:41. He ran for an impressive new best time of 2:06:52. Desisa simply hit the wall as the pace was just too rich for him.

The run started in darkness at 5:45 am local time to best take advantage of wind and temperature. The day started with a low of 11.6 degrees Celsius (53F) with cloud cover.

Desisa was done after 18 kilometres and began to slide off the back. Two kilometres later it was Tadese’s turn to slow and for the remainder of the race it was just Kipchoge, a group of pacers and a pace car with a clock displayed on the roof.

The next two 5K splits were 14:14 and 14:17 respectively. At the 30K mark, Kipchoge was on pace for a 2:00:01 finish time, surely a final sprint attempt would allow him to break the barrier, if he could hold on, however, he began to slow by the smallest of margins, running through 35K in the time of 1:39:37, which would put him six seconds off the mark.

During the final 3K, Kipchoge was beginning to show his very first signs of fatigue, as he began to drop a few steps back of the pacing group.

Although his 42.195K performance was machine-like, he just couldn’t quite finish fast enough, he ran the final few hundred metres as fast as his legs could carry him, crossing the line in the time of 2:00:25.

Before the run, respected sport scientists and former and current athletes had predicted that Kipchoge would either cross the line in the time of 2:02:00, some suggested 2:03:00 or a complete blow up where we would see Kipchoge stagger in to finish much slower.

He defied many expert opinions to run the fastest marathon distance event. This performance will create much more dialogue in the global running community about when the first man will eclipse the two-hour benchmark in a road race that can be ratified by the governing body.

The organizers were attempting to create excitement for the achievement similar to the running of the first sub-four minute mile that was accomplished by Sir Roger Bannister over 60 years before.

The lead-up to the event did not accomplish this, however, the post-event social media activity did provide excitement for Kipchoge and the potential he displayed for getting so close.

Shoestrings: At this time, it is not known precisely how far Kipchoge ran. The IAAF require that road courses be measured over the shortest possible tangents and have added one metre for every kilometer run, to ensure that the minimum in all conditions is completed. As runners typically do not run absolute perfect tangents, for example, crossing the road at fuelling stations and moving around competitors, often the marathon races turn out to be run over more than the 42.195K distance. The course was indeed measured by certified IAAF measures to ensure the course was accurate.

Below are the marathon distance runs below 2:04:00. The bold records are ratified by the IAAF. The Boston marathon entries are not ratified as the course is point-to-point and drops more than the allowable one metre-per-kilometre throughout.

On the heels of this running event, the European Athletics Association has proposed to the IAAF to remove world records in athletics that took place before 2005, which is the year that the world anti-doping association (WADA) and the IAAF began to permanently store blood and urine samples. Upon finishing the run Kipchoge was interviewed by Paula Radcliffe, who currently holds the women’s marathon world record of 2:15:25 set before 2005. She is not happy about the proposal as it is worded and is expected to fight, for the second time in her career, to keep her world record as official.