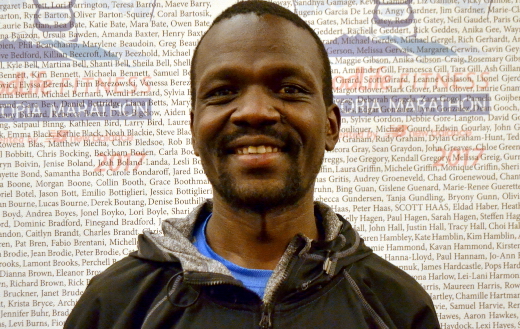 Daniel Kipkoech, five-time winner of the GoodLife Fitness Victoria Marathon is back and on Sunday is hoping to keep his streak alive. However, he may have some competition from fellow Kenyan Jonathan Chesoo.

Chesoo has run as fast as 2:10:27 in the Dublin Marathon, however, that was nine years ago.

More recently he ran 2:19:34 in May this year at the Calgary Marathon.

Thirty-two-year-old Kipkoech ran the 2015 Vancouver Marathon in the time of 2:18:49, which is his best showing. Currently, the two seem to be evenly matched. Chesoo is 31.

Only one other male athlete have won the race five times and that is New Zealander now living in Wales Kelvin Broad.

The top seed in the master’s is Kip Kangogo. The three-time winner of the TC10K is now 40 and he has a personal best of 2:15.

Vancouver’s Andrea Lee and Madeline Yungblut from Clifford, Ontario are the top women.

In the women’s field, Lee has been on the marathon podium the last three years; third in 2018 and 2016, and second in 2017, and so will be gunning to win this year. For Youngblut this will be her marathon debut; she has a personal best of 1:21:50 in the half marathon. Catrin Jones is the top female masters seed. A two-time winner of the Victoria Marathon, she is in fine form, having come ninth in the iconic Comrades Marathon this year and running 2:52 in the BMO Vancouver Marathon in May.

The half marathon men’s field is led by Kenyan Haron Sirma, who now resides in Brampton, Ontario. His best time is 1:04:32, two minutes off the Skarzysko-Kamienna, Poland course record of 1:02:32. Sirma has also run the Vancouver Half Marathon in the time of 63:47, however, the course is not certified.

Will Norris from Iowa is second seed and Vancouver’s Anthony Tomsich a coach and athlete with Mile 2 Marathon is third and will be hoping to capture the BC Half Marathon Championship title. Top master is Kevin O’Connor from Vancouver.

Danielle Thiel is the top seed in the women’s race. The 27-year-old from Edmonton was second in the BMO Vancouver Half Marathon this year. She will be chased by Cleo Boyd from Kingston, Ontario and American Nicole Jefferson who is the top-seeded master with a personal best of 1:12:32.

The 8K race could see exciting action in both the men’s and women’s races. Justin Kent from Burnaby is hoping to make it three in a row; he set a personal best last year, winning in 23:46, just 20 seconds off the course record. On his heels will be Rob Denault who is vying for a spot on the Canadian team for Tokyo and who, with a personal best of 22:59, could potentially set a new record. Denault is training in Victoria with the Athletics Canada West Hub.

The women’s field will see an interesting battle between two former winners of the 8K; Sarah Inglis who won last year and four-time winner Lindsay Carson. Inglis has run as fast as 26:47, while Carson owns a personal best of 27:17.

Both athletes are trained by Mark Bomba with the Langley Mustangs Endurance Group.

The master’s race will also be an exciting one with Victoria’s Jen Millar and Marilyn Arsenault both running. Arsenault has set six national age-group records as a master.

“The Elite field for the 40th Annual Goodlife Fitness Victoria Marathon will be one of the most competitive ever in all three distances,” says Ulla Hansen, High Performance Athlete Director.

“We are very excited about the depth of all our fields including Internationals, Canadians from across the country and local runners too.”