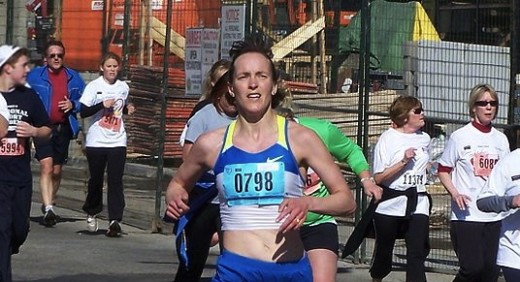 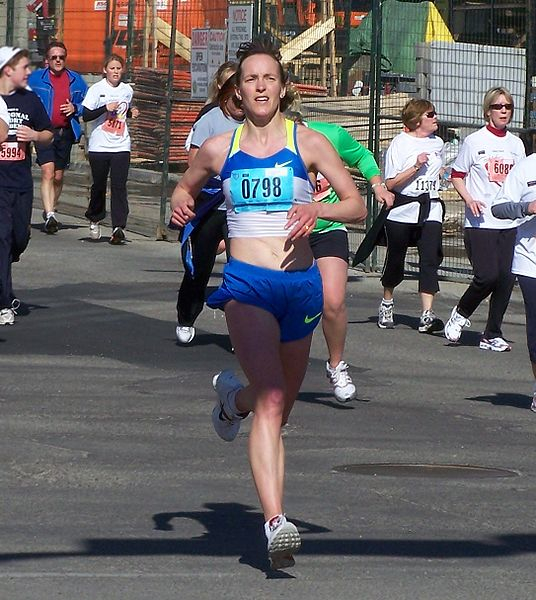 Canadian distance runner Lisa Harvey, is a competitor who just loves to run. She started in high school, and later ran varsity for the University of Calgary Dinosaurs in Calgary, Alberta. Harvey represented Canada in the 1992 Barcelona Olympic Games is a three-time IAAF World Track and Field Championships competitor, she also competed eight times for Canada at the IAAF World Cross Country Championships. She has also run for Canada in the World Half Marathon Championships and Pan-American Games winning a bronze medal in the 10,000 metre event. She has enjoyed a long and versatile career.

Harvey has two children, Allison, 12 and Patrick, 8. She is a Physical Education teacher. Recently I caught up with her, having raced a couple of local events, here on the west coast. First she ran in the Vancouver Sun Run 10k finishing in 33:58 finishing first Canadian and second overall. One week later Harvey was in Victoria, BC and took in the Times Colonist 10k. She finished first, just narrowly holding off a challenger who entered the chute less than a second after Harvey.

Christopher Kelsall: Congratulations on running so well recently, with your Times Colonist 10k victory, finishing 2nd at the Vancouver Sun Run 10k and first Canadian and your Mother’s Day, Sport Check 10k victory. You virtually tied with Cheryl Murphy in the TC 10k. Were you surprised by how close Cheryl was to you at the finish of the TC compared to the Sun Run one week earlier?

Lisa Harvey: Thank you, I was really excited to run well at both races! I knew that my competitors were not far behind. In the TC I did not know that Cheryl was that close behind me until someone told me as I was leaving the finishing chute. Cheryl and Kirsti (Kirsti Smith third at the Sun Run and TC 10k) have run some great races this spring, so I knew that they were ready to do well.

CK: What is next on the racing horizon for Lisa Harvey?

LH: I will be running some more 10ks and half-marathons this spring; including the ING Ottawa Race Week-end 10k at the end of May, Vancouver ½ at the end of June and the Tely 10 Mile in St. John’s, Newfoundland at the end of July. This is all to help gain a little more speed to run a marathon in the fall.

CK: Care to share with us, which fall marathon you are considering?

LH: I am thinking about the Toronto Marathon or another fall marathon.

CK: For marathon training long runs, there are quite the scattering of routines, some marathon runners never go over 20 miles, some use over-distance and of course the Japanese seem to do the highest mileage and longest long runs. What distance, frequency and pace do you apply to the long run, what works best for you?

LH: I am still in the experimental stages with the marathon, so the long runs still need some work. Usually runs around 20 miles with varying paces have been my favorite so far.

CK: You have competed for Canada in 10 World Cross Country Championships, raced well on the track accomplishing, 15:51 5000m and 32:40 10, 000m; also competing in the World Half Marathon Championships and you have raced the marathon distance before. Of track, cross country and road, which of the three do you prefer?

LH: I really do like running all disciplines, but at this point it would be cross country and road that I prefer. I love running on the track too and had the opportunity to compete for Canada numerous times over the last 19 years. I am working toward running faster at the marathon distance.

CK: There has been increased public discussion lately about the benefits of cross country running for track and road runners. An often used example is David Bedford. He was arguably the best cross-country runner and winner of a World Cross title. He used his endurance, which was built over the country to compensate for limited leg speed on the track. Following that he then managed to break the world record over 10,000 meters and the European 5,000m. Have your track and road times been consistently solid over the years because of the cross country training and racing you have done?

LH: Yes, cross country has always been the stepping stone for me to faster times on the track and roads. I feel that I have definitely benefited from running cross country, hills, mud, adverse weather conditions, soft and undulating surfaces all have helped to reach a higher level of fitness and develop mental toughness. I have always run better in the spring after a good cross season!

CK: Seb Coe recently made a comment to the media about the participation levels in cross country influencing running on the track. Is this what Europe and North America need to do more of?

LH: Yes, cross country is a fun way to build a base. You can build speed and endurance while running over different types of terrain.

CK: Were you surprised to see your name as a candidate on the list to be voted as the greatest Dino (University of Calgary Dinosaurs) of all time?

LH: I was surprised and happy for the sport of Track and Cross Country to receive some more recognition!

CK: Well said! Both you and Cheryl are running very, very well. What does it say to you about the depth in the Canadian running scene where two former CIS competitors are winning and placing in the road race scene at nearly 40 year of age?

LH: I think that it says a lot about the depth of the Canadian Running Scene. There are many great and potentially fast female distance runners in Canada at the moment. I was impressed by the depth of the Canadian Juniors and young seniors on the world cross country team in Scotland. Distance running is a sport that you do improve with age as your endurance and lung capacity improves.

CK: Can you tell me a bit about your training? Do you like to be quite fit all year or do you train towards seasonal peaks?

LH: My coach, Mike Van Tighem, is great. He understands the type, intensity, and timing of workouts that will help me to run fast. My husband, Paul McCloy, is a super training partner as well.

LH: Mike is really like an advisor. He e-mails the workouts and I follow the plan. That way I have more flexibility with training; as I also have 2 kids and am a physical education teacher.

CK: Your former coach, Alex Ulaszonek said the following: “I’ve had the pleasure of coaching many fine athletes who have represented Canada internationally, and have set Canadian records during their careers, but none of them had the immense work ethic that Lisa had.”

He added, “Lisa’s drive toward excellence in her running endeavors was quite phenomenal. I never had to worry about her not being able to finish any workout that I set up for her. It was a real pleasure to be able to work with an athlete of her caliber.”

CK: Do you consider yourself a hard worker?

LH: I just try my best! This is easy to do when you enjoy running like I do!

CK: You said Paul is a great training partner, how does this manifest itself.

LH: We both just love to run and are always happy to keep each other going!