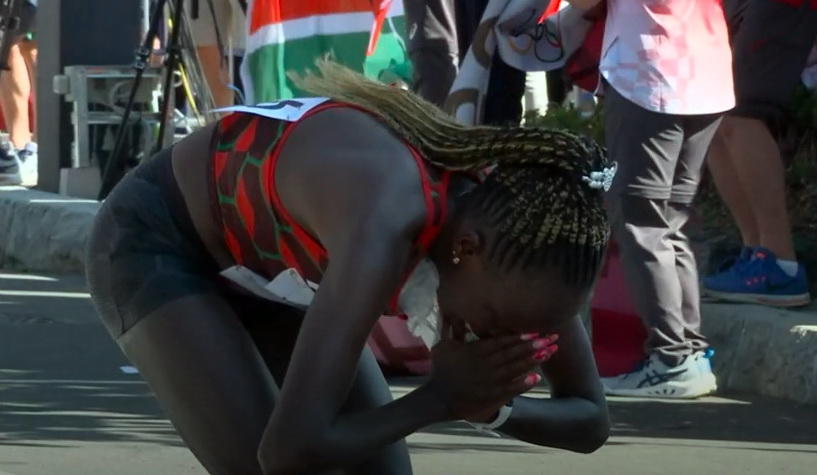 Kenyans Peres Jepchirchir and Brigid Kosgei took gold and silver in the Olympic marathon, while Molly Seidel of the US captured bronze in a performance-of-the-race finish.

Seidel, in only her third marathon and owning a personal best more than 11 minutes slower than Kosgei’s at 2:25:13, positioned herself in the lead group and did not let up. She drifted off the back of the two Kenyans after 36kms, however, maintained her position for third and running just six to eight seconds behind them until entering the long finish chute, where she faded a little more not that it mattered.

The temperature in Sapporo got up to 29 or 30 degrees Celcius. The same temperature that it was 800kms south in Tokyo. Not what the organizers expected. The purpose of using the city of Sapporo was the likelihood of the temperatures being cooler. The runners did benefit from a heavily treed route, which provided much shade as well as a last-minute schedule change to go an hour earlier.

The lead pack very gradually broke down from 12 to eight to three, and after the 36km mark, Jepchirchir put the squeeze on Kosgei, holding ice packs to her chest and lumbering through the finish intent on winning.

Another run of the day was by 41-year-old Canadian, Malindi Elmore, who finished an impressive ninth and just over three minutes down from Jepchirchir. Fellow Canadian Natasha Wodak, who had completed some workouts together, ran very well in just her third marathon. The two athletes clocked times of 2:30:59 and 2:31:41, respectively. Wodak at age 39 finished in a very solid 13th place. She is a former national record holder in the half-marathon, 10,000m and owns the national best over 8kms on the road. The two own the two fastest Canadian times in 2:24:50 and 2:26:19, respectively. Elmore took a long break from athletics, toyed with triathlon and ironman, and had two sons. She is a former 1500m specialist. Her comeback to the Olympics is a marathon story on its own.

At least 15 athletes dropped out of the race.

Isreal’s Lonah Salpeter – who worked in the lead pack to at least 30kms – is one of several that appeared to be ready to drop out, including walking for a few minutes, but laboured in rather wobbly and finished in the time of 2:48:31. There is something about finishing an Olympic race, regardless of what happens, but safety is important in an event as tough and long as the marathon in the heat, finishing sometimes is winning.