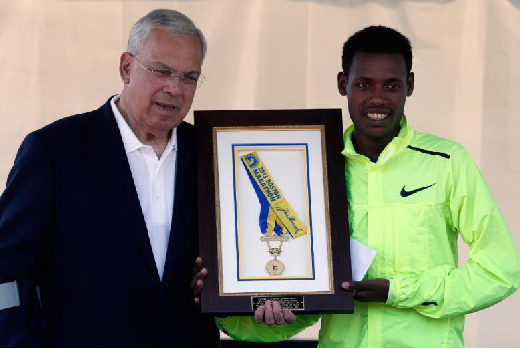 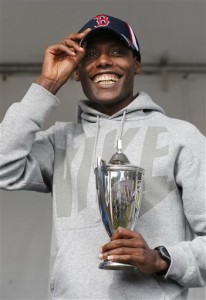 Lelisa Desisa is a 25-year-old Ethiopian long distance runner who specialises in the marathon. His personal best at the distance is 2:04:45, which he achieved at the 2013 Dubai Marathon, finishing first in a hard fought finish; four fellow countrymen finished sub-2:05. He also won the 2013 B.A.A. Boston Marathon.

Desisa earned a silver medal during the 2013 Moscow IAAF World Track and Field Championships in the marathon distance and a gold medal at the 2011 African Championships half marathon. His personal best at the distance is 59:30, which makes him the fifth fastest Ethiopian all-time.

Christopher Kelsall: How young were you when you started competing, were you on a school team?

Lelisa Desisa: Yes; I started in school where I competed in many Regional Championships and I won my first race ever for my school and they decided to take me to the National Trials for school age runners and I knew then I was going to be a runner.

CK: Who were your running heroes growing up?

LD: Of course being Ethiopia you know Abebe Bikila, Haile Gebrselassie and other great Ethiopian runners; but honestly I do not have an idol exactly. I just wanted to be a runner like them.

CK: What does your weekly training volume amount to?

LD: My weekly workout changes week to week; depending on what we are training for; but if it is marathon training we can go up to 200km a week in training.

CK: It appears that you raced on the roads in North America quite a bit before moving up to the marathon.

LD: Yes, indeed. The strategy of my coach and manager was to make me very strong over the short distances to have a strong kick and to mature both mentally and physically for the marathon. 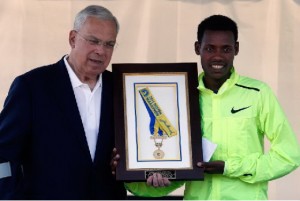 Kenyan Micah Kogo and countryman Gebre Gebremariam. Did you work hard on your finishing speed after 2010?

LD: You know in 2010 I was a young athlete and I lacked experience and I miscalculated that final sprint. I have confidence in my sprint and I am a good finisher; and I can sprint when I can see the finish line. I have demonstrated this finish in many events.

CK: Would you suggest that your win at the Cherry Blossom 10-mile (16-kilometres) race was a breakthrough that indicated you are capable of faster times in the half marathon and marathon?

LD: I would not say Cherry Blossom was a defining moment by itself but it was a very good race for me. But I have to tell you that same weekend I ran back to back races. A 10K named Cooper River Bridge Run on Saturday then I flew to Washington, DC that night to race the 16K on Sunday morning; the back to back races and handling the distances well let me know I could run longer races.

CK: How did life change for you once you started winning prize money, for example the $150,000USD from the Boston Marathon?

LD: We train very, very hard in our camps and we invest a lot of time and money in ourselves and careers as athletes. Yes, my quality of life has improved but it has not changed; I continue to work hard now more to see the awards and titles than the money; but the money is nice.

CK: Are you planning to race the IAAF Worlds in Beijing? Or will you be seeking a fall marathon like Chicago or a European one?

LD: My wish is to run in Beijing of course; but it is not my decision; it is the choice of the Ethiopian Federation. We have no wildcard this year for the marathon so I just need to hope that my achievements up to now are enough to get my picked for the team to go.

CK: Will you be also seeking to run in the 2016 Rio Olympic Games, if the federation picks you?

LD: Of course it is my dream to run in Rio as well. But yes it is in the hands of our federation.

LD: No, I was not surprised at all. Unfortunately that year as it was an Olympic year and I was forced by the Ethiopian Federation to run the 10,000m trials in Hengelo that year and was not able to go to the Rotterdam Marathon that year; where I felt my shape was the best. I later was not selected to the Ethiopian team for the Olympics even though I was second in the trials. It was a confusing year for me and my manager and coach told me to get over 2012 in my head and 2013 was my year to show the world who I was. 2013 was attributed to the support team around me.

For a world record it is more than just going to the line to run it. Everything needs to be perfect. My target is to continue to train hard and remain confident in myself and hope that when the one perfect day comes along I will be in the right place at the right time.