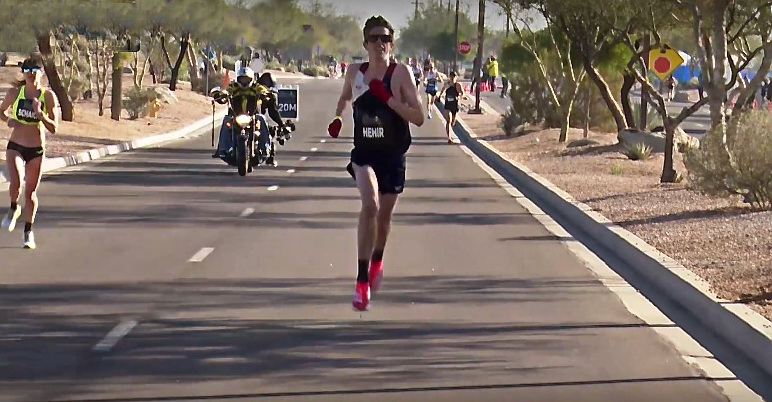 The story of the day was birthday boy Martin Hehir, who turned 28 on Saturday. He won The Marathon Project on Sunday, finishing with a top-10 all-time American performance and a big personal best of 2:08:59.

Meanwhile, Sara Hall set out to take Deena Kastor’s American record, which was set during the 2006 London Marathon at 2:19:36. She missed the record, however, settled for a new personal best and the second-fastest American performance all-time at 2:20:32.

Hehir made a dramatic move after the 20-mile mark, having sat in a pack of 14 for half of the race, which dwindled to 11, then exploded after he made his move. Noah Droddy followed and put in a very strong effort for second. Colin Bennie crossed the line in third at 2:09:38.

Droddy stopped the clock at 2:09:09. All three were personal best performances. Eight of the top ten men finished with personal bests. Among them was Canadian Ben Preisner (9th), who gives himself the opportunity to be nominated by Athletics Canada to take one of the three positions for the Tokyo Olympic team. He finished in 2:10:17.

“The pacing was amazing. It started to get hard, but because of the flat course, you were able to just go at the pace. I started to fall apart late in the race, but it was a great first day of 28,” said Hehir, who is studying to become an anesthesiologist.

As a student, the $5000 first-place prize will come in handy. He entered the race with a personal best of 2:11:29 from the US Olympic Marathon Trials in February in Atlanta. At the trials, he finished off the Olympic team with a sixth-place performance. Sunday, as for many Americans, The Marathon Project was a race for redemption, and he earned it.

Scott Fauble was one of the pre-race favourites going in. He owns a personal best of 2:09:09 from the 2019 Boston Marathon. He also didn’t race as well as he would like to during the Olympic Trials. On Sunday, Fauble finished fourth in the time of 2:09:42 — a strong performance.

Cameron Levins, the Canadian national record holder in the marathon with his 2:09:25 was on pace for most of the race, however faded late. He was with the lead pack of 14, but ended up crossing the line 15th in the time of 2:12:15, just 45 seconds off the Olympic standard of 2:11:30.

“I feel grateful to have the opportunity to race in my home state,” said Hall. “I was hoping to go a little faster, the competitor in me wanted a little more, but I am happy to have the second-fastest American time.”

Keira D’Amato took second in the time of 2:22:56. Kellyn Taylor finished third in 2:25:22. Pre-race most assumed that Hall would start the race with pacers and no other women, however, Taylor tried to make a race out of it.

D’Amato’s performance was a 12-minute personal best. She had run a 2:34:24 at the US Olympic Trials.

Canadian Natasha Wodak, who owns the national record in the 10,000-metre event at 31:41.59 ran a nine-minute personal best with the second-fastest Canadian performance all-time at 2:26:19, 21 seconds behind Emma Bates for fifth.

As Linden commentated, The Marathon Project event was the day to do it. The Marathon is a high risk and high reward event. All athletes took a serious run at the Olympic standard, national records and redemption at the end of the bizarre year that 2020 turned out to be.