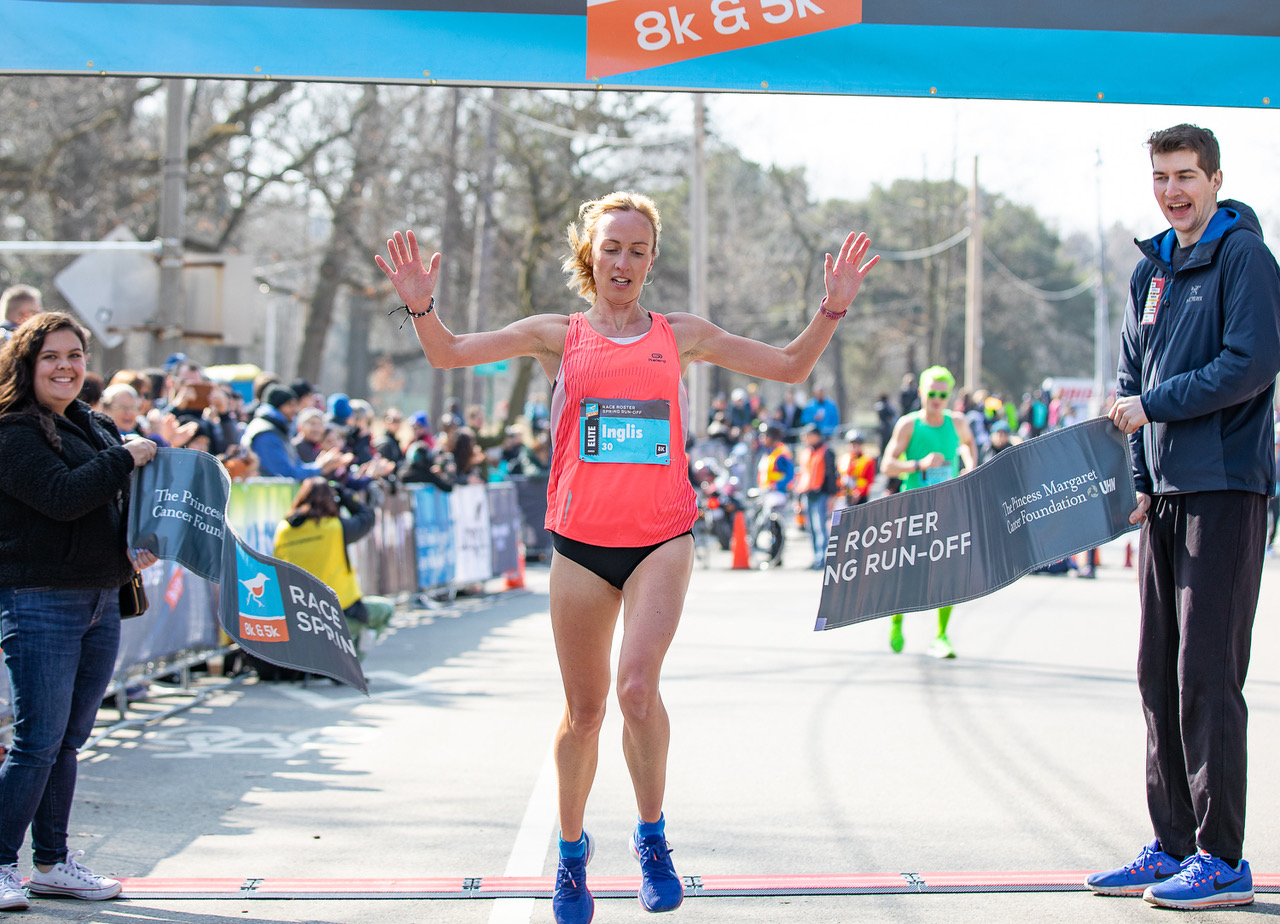 Under ideal conditions – which confounded veterans of this 42-year-old race – Tristan Woodfine won the Race Roster Spring Run-Off for the third consecutive time this morning while Sarah Inglis claimed the women’s title after a thrilling duel with Mengistu Emebet.

The nearly 4,000 runners who toed the line took advantage of the conditions. Indeed,
Woodfine’s winning time of 24:10 was the fastest of his three victories. Having run a superb marathon personal best in Houston (2:15:19) ten weeks ago the Cobden,
Ontario resident came into the race unsure of whether his legs could handle the shorter
distance. Through the first half of the race, he ran alongside Toronto’s Kyle Grieve with Adam Hortian of the Newmarket Huskies keeping within striking distance.

Woodfine accelerated in the second half of the race crossing the line 28 seconds ahead of
Hortian who was second in 24:38. Grieve bravely hung on to third place in 24:50.

After recently graduating from the Ontario Institute of Health and Technology Woodfine is
putting off his career as a paramedic in order to focus on his running. A little carpentry work with his father in Cobden, he says, is sufficient income at the moment. In addition to the $1,500 first place prize money he also collected 45 Canada Running Series points today.

He was the 2017 CRS overall champion and finished runner up last year.

“I went just after 4km,” he said at the finish line. “My race plan going in was to make sure I was relaxed in the first half because if you go out too fast on that course you can really suffer. And then, (I wanted to) really turn on the pace and kind of keep picking it up until the end. It worked out well today. It’s the first race of the season so it’s a bit of a ‘rust buster’ after the marathon.”

Hortian was equally pleased with his race. Standing next to his coach Hugh Cameron he spoke of the long Canadian winter that has placed limitations on he and his competitors.

“The weather is what it is,” he said laughing. “You go out and do what you can on the day.
That’s what I have been trying to do. It’s part of being a Canadian and being a distance runner.

“I was very pleased today. I went out and executed. My coach Hugh Cameron is one of the
original designers of the course back in 1978, so he has a pretty good methodology to attack the race. I stuck to the plan and it paid off in dividends.”

He earned himself $800 for his second-place effort and 39 CRS points while Grieve gets $400.

While the men’s race went according to plan the women’s race had an exciting edge to it with former Ethiopian international, Mengistu Emebet, pushing the pace from the gun. Last week she won the Around the Bay 30km (1:45:58) and, though she was feeling the effects of that effort, she bravely tried to control the race today. But Sarah Inglis, a Scot now living and teaching in Langley, B.C. was having none of it.

Tamara Jewett was a surprise 3rd place (27:12) ahead of Dayna Pidhoresky (27:30). The latter was also feeling the effects of her ssecond-placefinish at the Around the Bay 30km.

“During the entire race (Emebet) was trying to drop me,” Inglis revealed afterwards. “I was
thinking if I could just stick with her until at least a mile to go and then I would make a move. I tried to stick with her but she was making it hard for me.

“She was surging and finally I could sense her breathing was getting pretty hard. So I thought if I make a move now I could break her. I really kicked hard on the flat part before the last hill and managed to get away. Even coming up the hill I didn’t know how far behind she was.”

The winner, who left Falkirk Scotland to accept a track and field scholarship at Trinity Western University, had a more comfortable buildup to this race than Emebet. At Vancouver’s St. Patrick’s Day 5km she set the Canadian All Comers record of 15:29. Asked for her assessment of the race she laughed.

“It’s bloody hard. I did my warmup and we were talking about ‘kill the hill,’” she said, “I knew there was at least one hill but there was bloody five of them. Up and down. There have been some brilliant Olympians who haven’t broken 26 minutes here then, when I saw the course, I thought ‘it’s no wonder.’”

Emebet arrived in Canada just a year ago and is training with the Toronto Olympic Club under veteran coach Paul Poce. Smiling, she acknowledged she had not rested since winning the Around the Bay race and so was pleased with her 27:07, second-place finish.

“It was very good today because I had a competition last week and so I am too tired,” she
continued laughing. “I didn’t take rest so that was the situation for me. But it was a nice
competition and I have a good feeling.

“I am not a Canadian citizen I am a landed immigrant but not citizen. But I want (citizenship) I have to run for Canada. I want to run world cross country and the Olympics and the world championships for Canada. I would do them all.”

As a junior, she ran for Ethiopia three times at the IAAF World Cross Country Championships in the same team as the legendary Dibaba sisters, Genzebe and Tirunesh.

Besides the superb competition, roughly $50,000 was raised today for the Princess Margaret Cancer Hospital, bringing the total raised since 2006 a whopping $3.175 million!

Race director Alan Brookes, also pointed out that runners and donors have until June 1st to make a contribution.