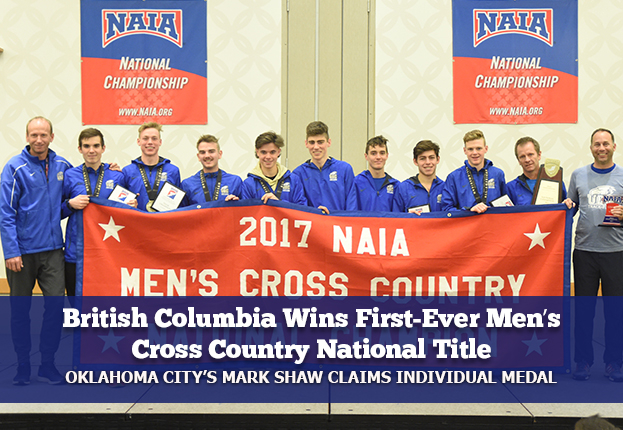 The University of British Columbia Thunderbirds swept the NAIA Cross Country Championships Sunday in Vancouver, Washington. Both the women’s and the men’s teams are 2017 national champions. It was the first ever win by the men’s team. It was the fifth title in a row for the women.

The men had a dominant performance with the top-5 placing in the top 20. According to Coach Chris Johnson, Kieran Lumb ran his best race of the season to capture the individual bronze medal.

“Tyler crushed the last mile to move from 35th to 19th. This was by far his best race of the season and sets him up nicely for Junior Nationals next weekend. When your fifth runner is 19th you know your team is in good shape!

John Gay, Jesse Hooton, and Max Trummer were formidable as they had been all season. Trummer has had a major breakthrough this season.

“He improved by over 100 spots over last year and made the BC Team travelling to Kingston next weekend,” said Johnson.

The Thunderbirds’ men collected the best team result of any team in 19 years with 41 points.

The top-5 overall men were Mark Shaw of Oklahoma City finishing in the time of 24:09, while Geoffrey Kipchumba of SR William Carey was 10 seconds back, Kieren Lumb of UBC led the team with a 24:27 performance and two back of Lumb was teammate John Gay in 24:41. Between them was SO Madonna’s Tony Floyd two seconds in front of Gay.

“It feels incredible to finally take home that title as a team,” shared second-place Thunderbird, John Gay. “Following the success we had as a team on the track this spring, I think our expectations towards cross-country were nothing less than winning our first national title. Entering this season, our squad knew we would come in as the favourites. With that expectation in mind, I think everyone involved did a really good job of handling the pressure in a healthy way, focussing on approaching the championship from a position of confidence in our individual abilities and that of the teammates next to us without either taking our championship potential for granted or putting undue pressure on ourselves to win.”

“Our coaches remarked to the women’s squad shortly after our race began about how collected and relaxed the men’s squad was in the moments leading up to the gun and I think it was that attitude, the belief in our own training and that of our teammates, that allowed us to perform to our best. Yesterday every single member of our team ran a mature and confident race within themselves and ultimately it was that ability of each guy to recognize his role within the group that won us the title,” added Gay. 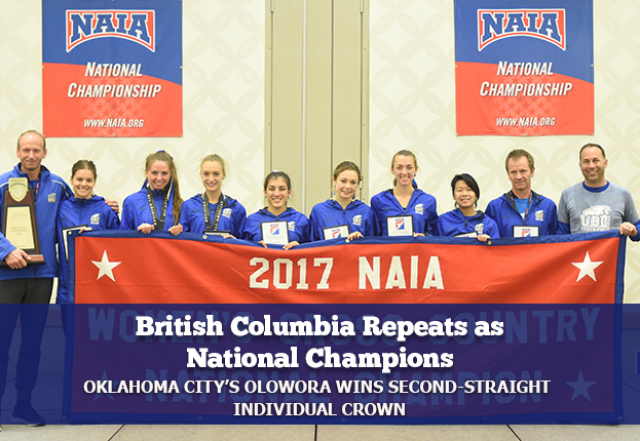 “Our top-5 (women) were rock solid,” shared Coach Chris Johnson. “Nicola (Symonds) ran her best cross-country race ever to capture bronze. Madelyn (Brunt), Enid (Au), and Nicole (Lacis) battled hard and ran very well to put us in position for the win. Freshman Madelyn Huston sealed the deal with her best race of the season. As a team, the UBC women ran their best race of the season when it mattered most.”

“I am very proud of our team. They are hard-working, driven and have great team spirit! We have great momentum heading into track season.”

Also in the top-5 individuals were Jessica Perkinson of Southern Oregon (17:20), Symonds, Lydia Mato of Oklahoma City (17:31) and Molly Vitale-Sullivan of College of Idaho (17:36)