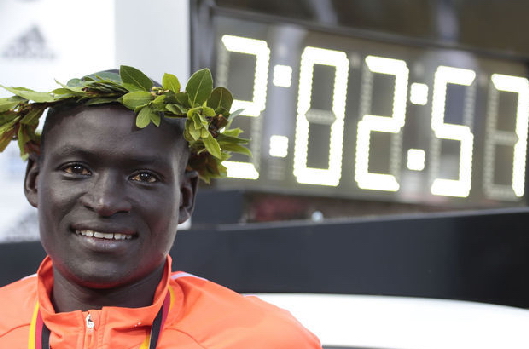 Dennis Kimetto is the world record holder in the marathon with his 2014 Berlin performance of 2:02:57. Formerly a corn and cattle farmer he was motivated to train seriously on a chance encounter with current training partner Geoffrey Mutai. Since then, Kimetto has become the first person to run under the 2:03:00 benchmark. He is also one of only three men to twice run under the 2:04:00 barrier, along with countrymen Wilson Kipsang and Emmanuel Mutai.

Kimetto keeps good company where he lives and trains near Eldoret in the administrative area called Kapng’etuny along with the second and fifth fastest marathon runners, all-time in Geoffrey Mutai and Wilson Kipsang. Although Mutai’s time was accomplished on the Boston Marathon course, which cannot be ratified for records, he has run as fast as 2:03:02. Kipsang briefly held the world record from his 2013 Berlin performance of 2:03:23.

Christopher Kelsall: Did you get to run or walk to school and back every day, as we hear that so many Kenyan’s kids do, growing up? What was the distance for you to school each day?

Dennis Kimetto: Yes, I had to run to school when I was late. It was around three to four kilometres from my home. Also, in lunchtime I had to go back home to eat lunch and then back to school.

CK: You ran several fast half marathons in 2011 and 2012 before moving onto the marathon, which event did do you feel provided an indication of how fast you could be in the marathon?

DK: The 2011 RAK Half Marathon that takes place in Dubai in the United Arab Emirates. I won in 1:00:40. That race gave me a lot of confident to run well in marathon.

CK: Which would you suggest was a bigger win for you, taking Kosgie’s 25K record or beating Kipsang at the RAK Half Marathon?

DK: The world record in 25km is a bigger win. A record is more valuable than beating somebody.

DK: It’s quite difficult always to say things afterwards, but I believe I could have been faster with a few seconds. I never realised how fast I was, I have learnt to plan more in the races. But all-in all, I am very proud of how I did it.

CK: In 2012 you said in an interview that there is no secret to Kenyans running so well, “just hard training.” Do you feel that Zane Robertson of New Zealand helped make your point with his 59:47 half marathon – having trained hard primarily with East Africans?

DK: Yes very much. He adapted to the African lifestyle and ran like we always do. Running is not easy, but with hard work you can make it.

CK: How do you feel about the concept of having cross-country take place during the winter Olympics? Do you feel this will bring the event back to relevance again?

DK: Yes it is good for people who are able to run cross-country well. It’s nice opportunity for those runners.

CK: Now that you have the fastest time and you are the first to break the 2:03 barrier, would you like to change your tactic and go for marathon wins in places like New York or Boston?

DK: My aim is to run on high level for a long time. Best competition is found in the world majors, so that’s where I prefer to go. I always go for the best possible.

CK: Do you plan to compete in the 2015 IAAF World Championships or the 2016 Rio Olympics?

DK: Yes, I would want that very much.

CK: Do you feel that with all the suspensions in doping that WADA and the IAAF are finally catching up with the dopers? Not just in Kenya, but Turkey, Russia and Jamaica?

DK: I think it’s good they put more effort in it in finding the dopers.

CK: You have said in the past that you are not motivated by the clock, but by your humble background and wanting to do better for your family. You have done that now. How do you stay motivated now that you are enjoying success?

DK: There are so many people to be helped. I have a big family and so does my wife. I want to make sure our future is settled and also for our child(ren). Also, I need to be a role model to my fellow athletes.

CK: Regarding the growing Kenyan middle-class population, do you think that will affect the quality of distance runners coming from your country?

DK: I believe quality runners only come with talent and hard work. Whether poor or rich, people must be able to have that motivation and go for it.