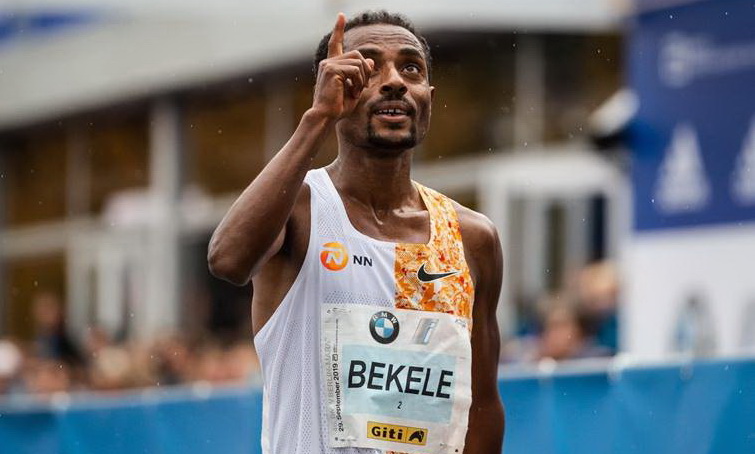 Coming off the second-fastest marathon of all time during the BMW Berlin Marathon this fall, Kenenisa Bekele has set a new goal for himself and will join the world’s fastest men in the streets of London, UK. Bekele will join teammates Eliud Kipchoge and Mule Wasihun, who finished third during last year’s race.

Bekele, whose best finish in the Virgin Money London Marathon was second in 2017, said: “I am thrilled to be returning to London. I feel like I have unfinished business here and I would love to win this beautiful race.”

“I am looking forward to race against Eliud once again. We have had many great battles over the years on the track, roads, and cross-country. He is a special athlete who proved that again with his magnificent achievements last year.”

“I feel like my win in Berlin proved that I am still capable of winning the biggest races in the world and in world-class times. I am really looking forward to what I can do in London.”

Kipchoge and Bekele have previously met four times over the marathon distance, including twice at the Virgin Money London Marathon (2016 and 2018), with Kipchoge coming out on top each time. But Bekele has the better head-to-head record over all distances and surfaces.

The 35-year-old Kipchoge owns a personal best of 2:01:39 from the Berlin Marathon, which is the world record. He has also run sub-2-hours over the distance in an unofficial race, finishing a publicised time trial in the time of 1:59:40, two years prior he nearly broke two hours in a similar event called Breaking2, finishing in the time of 2:00:25 in Monza, Italy. He has won 11 of the 12 marathons that he has entered, finishing second in Berlin in 2013.

Kipchoge earned Olympic gold during the 2016 Rio Olympic marathon and won silver and bronze medals at the 5,000m distance in Athens and Beijing Olympic Games.

Thirty-seven-year-old Bekele continues to hold the world record for the 5,000m and 10,000m distances having run 12:37.35 and 26:17.53, respectively. He is the second-fastest marathon runner all-time behind Kipchoge with his pb of 2:01:41 from Berlin 2019 – during not ideal conditions. He has earned an unprecedented 12 World Athletics (IAAF) World Cross Country Championships gold medals, three Olympic gold (1 bronze, 1 silver) and 17 Diamond League gold medals.