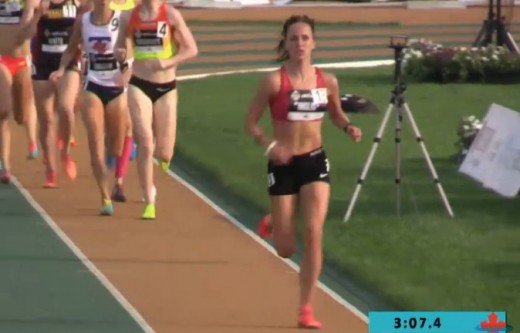 If you watched the women’s 1500-metre finals at the 2015 Canadian Track and Field Championships at AthleticsCanada.tv, you may have been entertained by a very tactical race that required a powerful kick to win. For most of the race, you could have thrown a beach towel over all of the Canadians, they were that close, except for Scottish runner Sarah Inglis.

The race started off at a reasonable pace for the first 100m, at which point Inglis went to the front of the pack, and then subsequently took off like a shot. After 300m she was alone and way out in front, by as much 50m, which is highly unusual in the 1500m event. She ran without fear. Asked if she realized how far out in front she was she told Athletics Illustrated, “I only realised after looking up to the big screen on the first home straight. I was then committed so thought bugger it, let’s see what I can do!”

The top women included Winnipeg’s Nicole Sifuentes who two days before won the national 5,000m title. She also earned a bronze medal at last year’s IAAF World Indoor Championships. There was Kate Van Buskirk who earned a bronze medal at the 2014 Glasgow Commonwealth Games and Sheila Reid an NCAA national champion. Sasha Gollish was in the race, she is taking Canadian middle-distance by storm – coming from the sport of triathlon. This is a strong field.

“In the semi-finals I got boxed in and got outkicked for an auto-qualifying spot in last 200m. Coming from 5K training, I don’t have the speed to kick off from a slow pace compared to these middle-distance girls. Going into final I knew I would have to take the race out earlier to have a chance of placing high. In the first 100m, I knew no one was going to take it on and although I went earlier than Coach Bomba and I had talked about, I have no regrets. Finishing fifth and giving it a go played to my strengths. Next time I am just going to be stronger and eventually I will be able to hold on!” shared Inglis.

Inglis runs for Trinity Western University. She was recruited by outgoing Coach Laurier Primeau, who spent time coaching in Scotland, although her Coach is Mark Bomba (at TWU), who is known for bringing Fiona Benson from respectability to now being the fastest 800m runner in Canada this year with her amazing breakout this spring. She dropped her times from 2:08.54 to 1:59.94 over a two-week span of racing. She won the 800m Canadian championships too, also a tactical race. 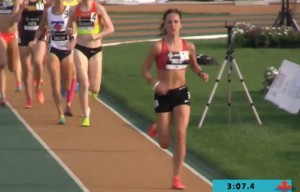 By the time that Inglis got caught by the pack, she had no idea what sort of time she was running, but bravely hung on. “ I have no idea, at that point what the time was, but I knew the girls were coming and times were not really on my mind!” said the 23-year-old.

At 1300m, Sifuentes let fly a finishing kick that drew out the top women, but the positions were pretty much set, no one was catching Sifuentes. She runs that smooth. She doesn’t appear to have much of a kick, but she clearly does. If you need a visual queue, you might have to look at the space she creates between her and the next runner, as opposed to her leg movement. She won her second national title in three days. Inglis finished fifth in 4:26.42, just over six seconds back of Sifuentes. It was a brave attempt to see what would come of it.

Asked what’s next for Inglis, she said, “I have BC provincials this weekend in Nanaimo which will be my last track race of season. I am possibly racing a 10K road race in Vancouver the following weekend. After those races, I will have a wee down week then back to base for cross-country, which I’m already looking forward to!”