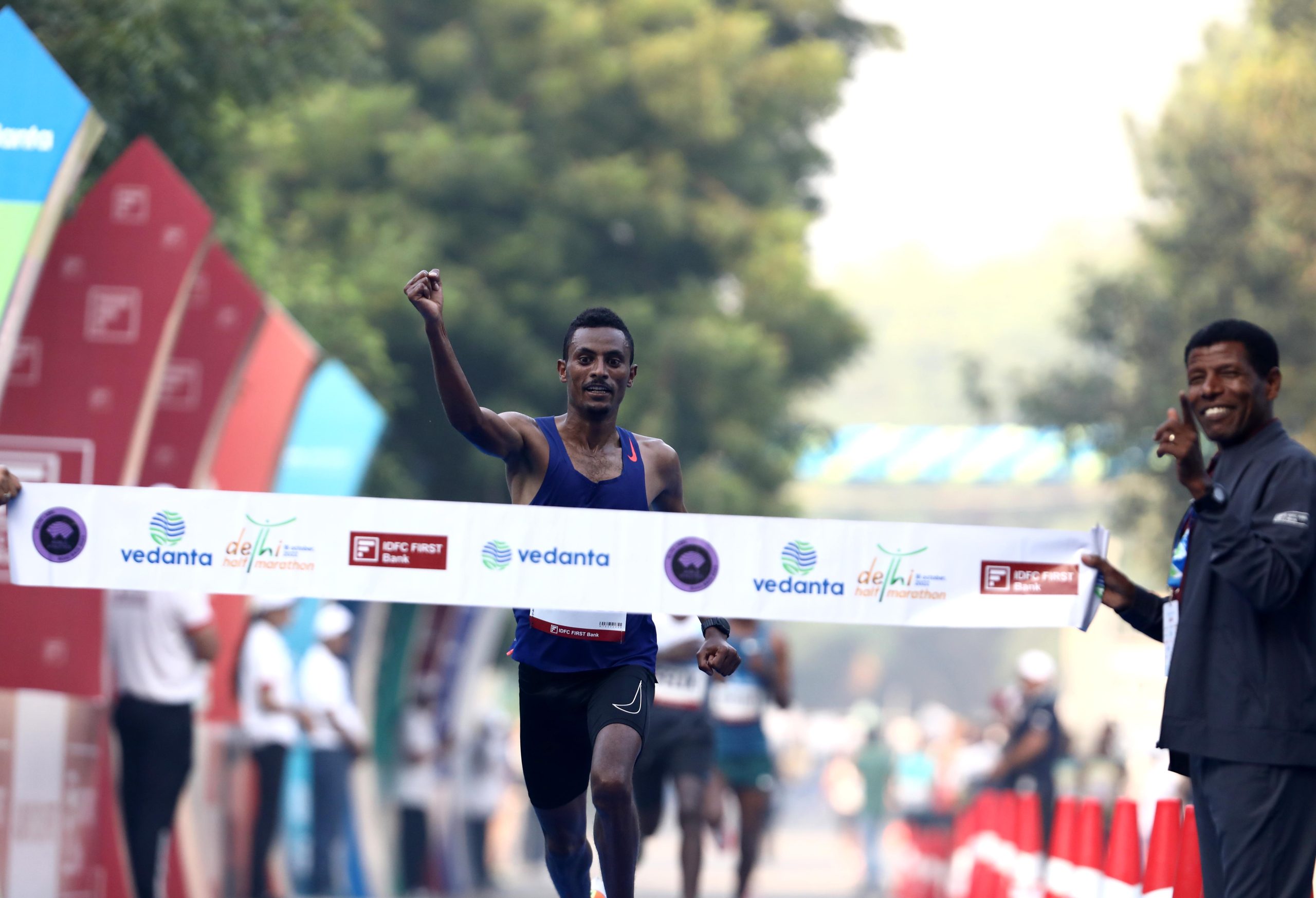 Ethiopia’s Chala Regasa and Kenya’s Irine Cheptai took the honours at the Vedanta Delhi Half Marathon 2022, a World Athletics Elite Label Race when they crossed the line in 60:30 and 66.42 respectively on Sunday.

Regasa, 25, came out on top of a thrilling three-man battle over the final kilometre on a misty morning in the Indian capital, sprinting away from Kenya’s Felix Kipkoech and fellow Ethiopian Boki Diriba with 400 metres to go to take the US $27,000 first prize.

A relatively sedate early pace in the men’s race saw a large group of the elite international field go through 5km in 14:21 and then 10km in 28:48 which meant that the course record – 58:53 set by Ethiopia’s Amedework Walelegn in 2020 – was unlikely to be challenged despite the classy field with 11 men who had run under one hour and who had gathered to contest one of the world’s leading half marathon races.

Kenya’s Moses Koech, who was to finish sixth, made a noticeable surge just before the 12km checkpoint and was accompanied by Kipkoech, who was frequently to the fore of the main group but couldn’t shake off any of the main contenders. Nine men were still in contention as 15km was passed in 43:22, guaranteeing a thrilling finale over the final quarter of the race.

Nine men were still in contention as 15km was passed in 43:22, guaranteeing a thrilling finale over the final quarter of the race.
Shortly after 15km, Kipkoech increased the tempo which splintered the leading pack as one-by-one runners drifted away the front. One of the first to be detached was Ethiopia’s two-time 5000m world champion Muktar Edris, who came home eighth.

By 19km, the leading group was reduced to just four men, with Kipkoech still doing the majority of the work while Regasa and Diriba, both looking comfortable, watched his every move, with Kenya’s Joshua Belet also gamely hanging on before having to relinquish his place on the podium just before 20km.

The leading trio passed 20km in 57:31 and duelled almost all the way to the finish line at the famous Jawaharlal Nehru Stadium.
“The final two kilometres were tough, but I knew I had the speed come out in front as I have a good background at shorter distances on the track,” said Regasa, who was formerly a top-class middle-distance runner.

By contrast, the women’s race was a one-woman show from just after halfway.

A group of ten women went through 5km in 15:40 and, despite a slowing of the pace over the next five kilometres, there were still six together at 10km passed in 31:42.

However, Cheptai made a decisive move just after 12 kilometres and was never headed before reducing her personal best by one second to 66:42.

Cheptai finished more than a minute in front of Ethiopia’s 2022 World Athletics Championships 5000m bronze medallist Dawit Seyaum, who finished second in 68:02, while Stella Chesang set a Ugandan record of 68:11 in third place.